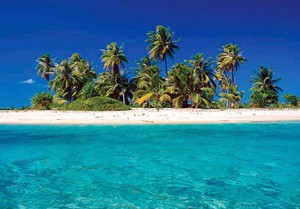 Barbados is an island situated between the Caribbean Sea and the Atlantic Ocean, northeast of Venezuela and east of the Windward Island chain. It covers an area of 430 square kilometers (166 square miles), roughly 2.5 times the size of Washington, DC. Its coastline is 97 kilometers (60 miles) in length and its capital, Bridgetown, is situated at a natural harbor on the southwest coast of the island.

Many Caribbean islands have beaches, but where Barbados differs is what lies behind the surf and sand. No matter your budget or style, you can find a place to stay that suits you, whether cheap, funky, restful or posh. All the comforts of home are close at hand if you want them as Barbados is one of the most developed islands in the region. The literacy rate approaches 98% and the capital Bridgetown and its surrounds are booming.

Away from the luxury resorts of the west coast and the well-developed south coast, however, is where you’ll find what makes the island special. Central Barbados has a rolling terrain of limestone hills and amid this lush scenery are fascinating survivors of the colonial past. Vast plantation homes show the wealth of these settlers and face up to the brutality of the slave trade. Museums document this engrossing history while several botanic gardens exploit the beauty possible from the perfect growing conditions.

The wild Atlantic-battered east coast is a legend with surfers; those looking for action will find wind-surfing, hiking, diving and more. Barbados is a great package, and despite its popularity, you’ll have no trouble making it your own. Away from the glitz, it’s still a place of classic calypso rhythms, an island-time vibe and world-famous rums.

Half a million people can’t be wrong. That’s the number of visitors Barbados attracts annually, and it doesn’t take long before you see why they come by the planeload: the coasts are ringed by the kinds of azure-water and white-sand visions that fuel the fantasies of Brits, Americans and Canadians stuck shivering away in some snowy winter clime.

There are beaches everywhere. Along the East coast they are wide and wind-blown. Here the shore is pounded by the Atlantic making it a delight for the surfers who come from all over the world.

On the calmer South and West coasts, you may walk for miles along unbroken white sand beaches, sometimes stopping at a cluster of coral rocks jutting out to sea. All along the shore large and small beaches are broken by coral formations, the soft coral rocks weathered by the ocean surf, forming abstract sculptures pleasing to an artist’s eye.

In the North, coral and sandstone cliffs rise straight out of the sea reaching up to a hundred feet in height. But even here, you’ll find the occasional sheltered cove.

With its warm crystal waters and spectacular array of tropical sea life, Barbados is truly a diver’s paradise.

Barbados is surrounded by a colorful array of patch and fringe reefs and two distinct barrier reefs running along the west and south coasts.

With a variety of hard and soft coral species, Barbados’ reefs are home to an abundant array of sea creatures and colorful fish life.

Excellent diving can be had year round. Water temperatures rarely go below 79°F (25°C) with visibility extending up to 100 ft in summer months between June – September and averaging between 12 – 23 ft for the rest of the year.

Most dive shops operate out of the southern and western sides of the island in the Caribbean Sea. However, several dive operators venture into the more untapped and rugged North and Eastern Atlantic waters during the summer months.

Shop in Barbados with duty free discounts at the various shopping malls and craft centres to choose from during your stay in Barbados.

Barbados is renowned for duty free shopping on designer goods. So if you are looking to buy a special gift such as jewelry, then you can make significant savings by making your purchase while shopping in Barbados at duty free discounts.

Please note when buying duty free goods in Barbados you will need to present your passport and details of your address in Barbados to qualify for the duty free price. Also note that all alcohol and tobacco purchases made outside of the airport or port will not be handed over the counter but delivered straight to your port of departure for collection when you leave the island. 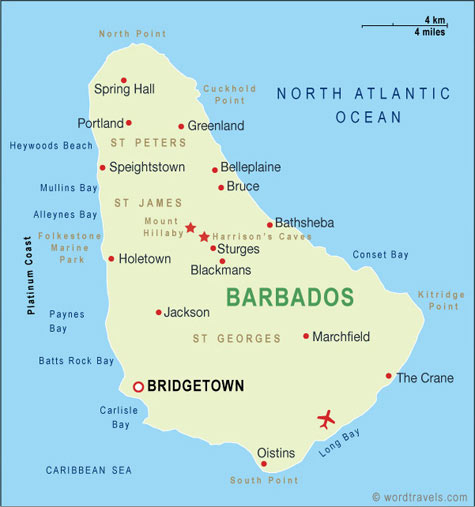 St. Nicholas Abbey is the most treasured attraction in northern Barbados. It is the oldest house on the island, and one of the three remaining examples of Jacobean-style architecture in the Amrericas. This stone and wooden structure offers a revealing view of aristocratic plantation life.

The Abbey was built in 1650 by Colonel Benjamin Berringer, a landowner and member of an aristocratic family, which dominated the social and political life of the island at that time.

To the north of the Abbey are ruins of the sugar factory that once ground the canes produced on the estate. The factory was closed in 1947; however, the present owner, Stephen Cave, has some old film footage which shows various aspects of life at the Abbey early in the 20th Century, including workers in the factory. This intriguing footage is shown to visitors on request.

Farley Hill National Park is also located in the north of the island. This paradise consists of several beautiful acres of tropical trees and plants. The park and its great house sit on a cliff 900 feet above sea level and offer a commanding view of the entire Scotland District. 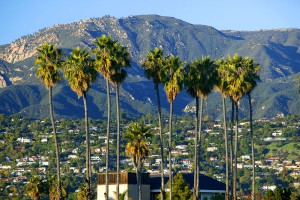 Gun Hill, the highest point in central Barbados, is rich in history. This historic site was the home of a signal station for the British Imperial Forces. Perched on a cliff is a milk-white limestone lion which was sculpted in 1868 by Henry Wilkinson, the Adjunct-General of the Forces.

Barbados’ bustling capital, Bridgetown, is also the island’s only city and is situated on its only natural harbor. Its many sights and old colonial buildings can easily occupy a day of wandering. Head along the side streets of the main drags to discover residential neighborhoods scattered with rum shops and chattel houses.

Many enjoy taking a respite from their day at one of the cafés or snack stands along the south banks of the Constitution River. There is good shopping, especially along Broad St and on pedestrian-only Swan St, which buzzes with the rhythms of local culture.

If you like nature, hiking (at any level), plants, culture and natural history, then Welchman Hall gully must not be missed.

The tranquil feel of the gully will instantly strike you. It is a place where you can experience a piece of nature and imagine what the island was like 300 years ago. It is a touch of tropical forest, mixed with Barbadian and other exotic tropical plants.

Since Barbados does not have many remaining tropical landscapes that are easily accessible, visiting Welchman Hall Gully will be an unexpected surprise and treat.

Climate & when to Go

The tourist high season runs from mid-December through mid-April. June through October is the hurricane season: September and October are the most humid months and have the highest hurricane risk – although many years see none.

Like the rest of the region, the temperate season is also high season, so expect prices to peak December to April. Other times Barbados is wetter and hotter but also much cheaper.

When planning your Barbados vacation remember that the Barbados Dollar is converted at the rate of $1.98 BDS to $1.00 U.S.

The Barbados Dollar is fixed to the U.S Dollar and does not fluctuate. Its rate to other currencies fluctuates daily based on their fluctuations relative to the U.S. Dollar.