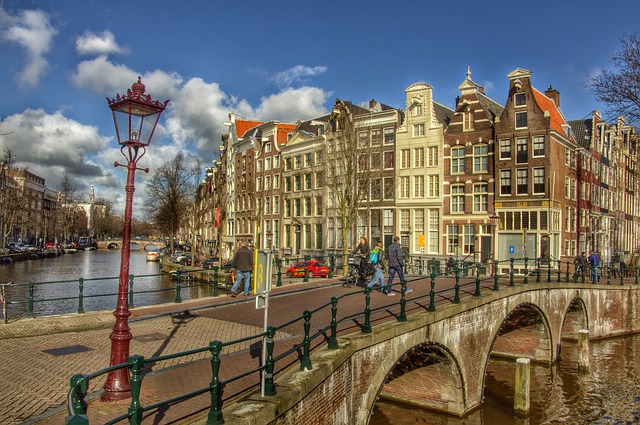 AMSTERDAM is a beguiling capital, a compact mix of the provincial and the cosmopolitan. It has a welcoming attitude towards visitors and a uniquely youthful orientation. For many, however, its world-class museums and galleries, notably the Rijksmuseum, with its collection of seventeenth-century Dutch paintings, and the Van Gogh Museum are reason enough to visit.

Amsterdam was founded on a dam on the river Amstel in the thirteenth century. During the Reformation it rose in stature, taking trade away from Antwerp and becoming a haven for its religious refugees. Having shaken off the yoke of the Spanish, the city went from strength to strength in the seventeenth century, becoming the centre of a vast trading empire with colonies in Southeast Asia. Amsterdam accommodated its expansion with the cobweb of canals that gives the city its distinctive and elegant shape today.

Come the eighteenth century, Amsterdam went into gentle decline, re-emerging as a fashionable focus for the alternative movements of the 1960s. Despite a backlash in the 1980s, the city still takes a uniquely progressive approach to social issues and culture, with a buzz of open-air summer events, intimate clubs and bars.

The Albert Cuypmarkt is arguably the best-known and busiest outdoor market in Europe. It attracts thousands of visitors every day, and is especially popular on Saturdays. There are over 300 stalls and goods range from fresh produce, to clothes, to odds and ends, with prices among the cheapest in Amsterdam. The market is located in the Pijp district, surrounded by many pleasant cafes and small shops. There is another number of regular street markets in Amsterdam.

This old church with little houses clinging to its sides, remains a calm heaven at the heart of the Freneric Red Light District. Its buildings, especially the Gothic-renaissance style octagonal bell tower, was used by sailors to get their bearings 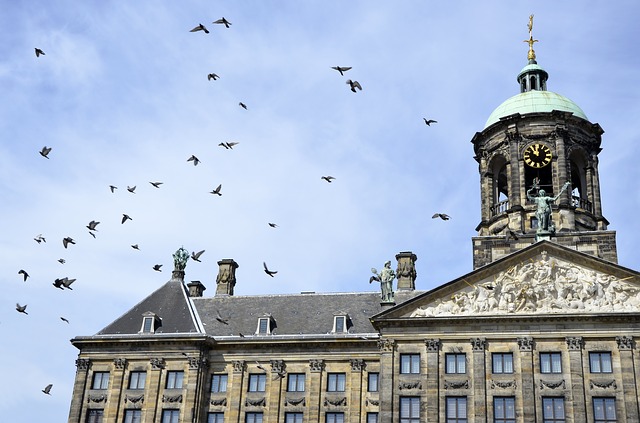 The Dam is the very centre and heart of Amsterdam, although there are arguably prettier sights in the city. As an historical site however, it is fascinating and worth taking the time to appreciate. The Dam has seen many historical dramas unfold over the years, and was for example, the reception area for Napoleon and his troops during the 1808 take-over of the city. The impressive history of the square is well documented in the Amsterdam Historical Museum. The Royal Palace (Koninklijk Paleis) which dominates the square, was originally used as the town hall and its classical facade and fine sculptures were intended to glorify the city of Amsterdam and its government. In contrast to its turbulent history, the square is now a peaceful place and is home to hundreds of pigeons and tourists resting their tired feet.

Right in the center of Amsterdam, you can also find the oldest Zoo of Holland. It consists of four main areas: Zoo, Planetarium, Botanical Gardens and Geological and Zoological museum. In the zoo itself you will find animals from all over the world. In addition, a unique canal aquarium shows you which animals roam the canals of Amsterdam. The planetarium offers children a trip trough the universe. In the peaceful gardens, you can find many old trees and statues of contemporary artists and aswell as an impressive, tropical rainforest greenhouse. The Geological museum shows you how the planet has evolved over the past 4 billion years.

Unlike the climate suggested by 17th-century landscapes depicting half-frozen skaters, Amsterdam has a temperate maritime climate with cool winters and mild summers. The best time to go is May (when the tulips are out) to August, when the weather is most reliable, but an Indian summer during September and early October can be delightful.

Rain is spread evenly over the year, often in the form of endless drizzle, though the statisticians tell us that most of it falls at night (yeah, right). It’s best to bring a foul-weather jacket in case of the occasional cold snap or rainstorm. Very few hotels have air con­ditioning, although higher temperatures due to global warming are slowly forcing a change. December to February is the coldest period, with occasional slushy snow and temperatures around freezing. It rarely freezes hard enough to allow skating on the canals, but when it does, the city comes alive with skaters. And you couldn’t wish for better photo material than Amsterdam after a dusting of snow.

Amsterdam is the city of antiques, books, diamonds, and curiosities. In general, shop-opening hours are 1-6pm on Mondays and 9/10am-6pm Tuesday to Friday. Most have late night shopping on Thursday until 9pm, and close earlier on Saturdays, at 5pm. Some supermarkets, like Albert Heijn stay open until 8 or 10 pm. On Sundays, you can shop in the city center, Kalverstraat, Damrak, Leidsestraat, and near the Noorderkerk.

Since many roads in the center are closed to cars, it makes for pleasant shopping. You will still find busses, trams, taxis and bicycles though, so watch you step. There are several “shopping corridors” in the city and each one has it’s own charms and specialties.

First off: Nieuwedijk-Kalverstraat, about 1 km full of shops. This pedestrian area, there is no traffic other than a constant stream of tourists, students, scholars, excursionists and locals. The Nieuwedijk is close to Central Station and basically dedicated to clothing, sportswear, music and gift shops with that special Amsterdam vibe. The road leads to Dam Square. Around this square you will find the Royal Palace, the Nieuwk e Kerand Madame Tussaud’s.

On the other side of the square the shopping continues: you are now entering the Kalverstraat. More shoes, clothing, bags, gift shops, cards, perfume, and the occasional coffee shop, fast food restaurant and ice cream salon. You will find that nearly all mainstream brand names have one or more store on this road. Here you can also find Waterstones and American Book Center. For a quiet drink away from all these shops you can make a sidestep onto Spui, where you will find many cafes, bars and restaurants and several fast-food chains.

Parallel to the Nieuwedijk-Kalverstraat are the Damrak and Rokin. This is a normal road, so beware of bicycles! The Damrak is filled with restaurants, hotels and exchange offices. Here you can find Himalaya, a spiritual bookstore and teahouse, slightly off the Damrak, just before the Red Light area.

At the end of the Kalverstraat on the Muntplein, you will find all sorts of tulips, narcissus and other bulbs and flowers on the Flowermarket. The bulbs are ready for export, so you can enjoy them at home too.

Citizens of Australia, Canada, Ireland, New Zealand, the UK, and the US need valid and current passports to enter the Netherlands and to re-enter their home countries. The Netherlands does not allow entrance to Americans, Australians, Canadians, and New Zealanders whose passports expire in under three months; returning home with an expired passport is illegal and may result in a fine.